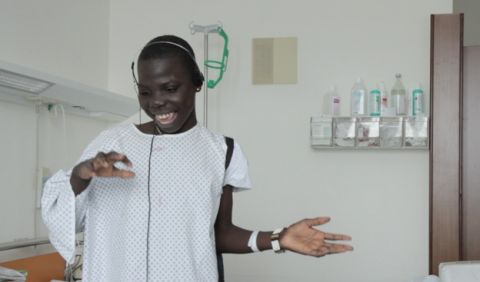 ARLETTE. COURAGE IS A MUSCLE.

ARLETTE. COURAGE IS A MUSCLE.

A journey from Africa to Berlin turns into an unexpected journey from childhood to adulthood. The film centers around Arlette, a 15-year old girl from the Central African Republic who suffered severe injuries during the last war. In Berlin a surgery frees her from her year-long pain. This changes her both physically and mentally: suddenly Arlette is in her puberty. 
Born in Berlin, Germany, in 1987. After high school he worked in the development cooperation in West-Africa. Afterwards he completed his studies in social anthropology, sociology and political science at the University of Basel. Since 2011 he is a student of directing class of the German Film- and Television Academy Berlin. Arlette. Courage Is a Muscle. is his first feature film.