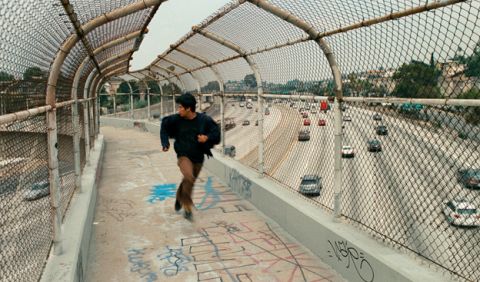 Nero is a 19-year-old deported Mexican. After several attempts Nero finally manages to return and make his way back into the promised land. In an ultimate attempt to escape his desperate reality, Nero decides to enlist in the US Army as a “green card soldier”, a short cut to citizenship. Nero is lost in a desolate landscape, where the boundaries between the immigrant in uniform and the US soldier are difficult to perceive. Although it soon becomes clear that while a soldier fights for a nation, the green card soldier, Nero, fights to obtain his identity. 
Born in Iran in 1967. He fled and moved to the United Kingdom during the war between Iran and Iraq, in 1981. Ten years later, he graduated in film and photography in London and directed his first short film In Exile (1991). Moved to Paris in the 90’s and worked as an assistant production manager of the film The Lovers on the Brigde (1991), by Leos Carax. Directed the features The Fifth Season (1997, 21st Mostra), It’s Winter (2006, 30th Mostra) and The Hunter (2010, 34th Mostra), and the documentary Abel Ferrara: Not Guilty (2003), episode of the TV series Cinéma de Notre Temps.