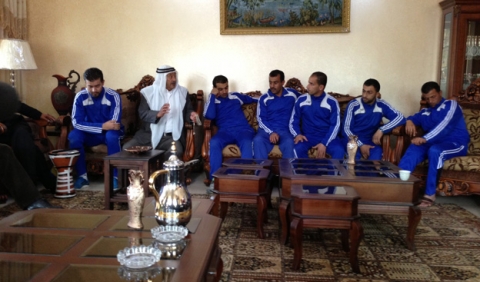 Four filmmakers, Israeli and Palestinian, direct short films of both documentary and fiction on the subject of sport. In five segments, the movie shows a soccer team in Palestine, a young runner who competed at the Olympic Games in London, prisoners who take yoga classes, surfers of an Arab village in Israel and an officer trying to take his son to a soccer match for the first time. The project is a continuation of Water (2012) screened at the 36th Mostra. 
Born in Tel Aviv, where he lives, Gur is a student at the film and television department of Tel Aviv University.


Born in Tel Aviv, where she lives, Lily graduated from the department of film and television of Tel Aviv University. 
Born in Holon, Israel, where she lives, Tal is a student at the film and television department of Tel Aviv University. 
He lives in Ramallah, where he teaches film editing at the Alasarya College. He also directed the segment Karem’s Pool, part of the feature film Water (2012, 36th Mostra).