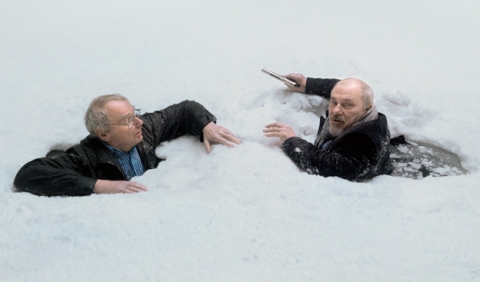 After 40 years, Harold`s successful business selling furniture is bankrupt when Ikea decides to open a new superstore right next door. Harold and his wife, Marny, lose both their shop and their home, and to make matters worse, Marny loses her memory. In mounting anger and desperation, Harold decides to exact revenge. He is going to kidnap his nemesis: the founder of Ikea, Ingvar Kamprad. Unfortunately, Kamprad is happy to be kidnapped, and sees the episode as an opportunity to buff up his public image.


Born in Norway in 1966, he started his career in 1993 and directed documentaries, short movies, music videos and over one hundred commercials. In 2002, he directed his first feature film Falling Sky. He is also the director of Trigger (2006) and Vegas (2009). Here Is Harold is his forth feature film.