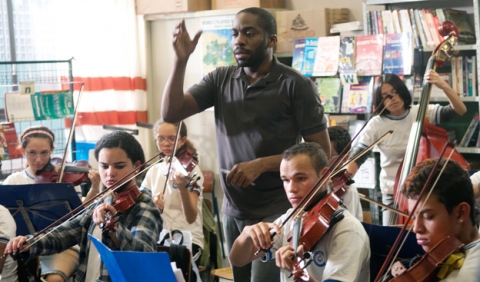 Laerte is a promising musician who suffers a crisis while auditioning for a spot at Osesp, the Symphony Orchestra of the state of São Paulo. He misses the chance to work in the largest symphony orchestra in Latin America and, frustrated, he starts teaching in Heliópolis —a project of the Baccarelli Institute—, a big slum area in São Paulo. At the school, surrounded by poverty and violence, he rediscovers music in such a passionate way that it is contagious to the young students. The movie tells the story of the beginning of the Heliópolis Symphony Orchestra and is inspired by the play Acorda Brasil, written by Antônio Ermírio de Moraes (1928-2014).