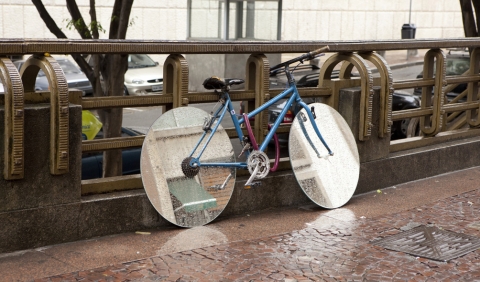 A short film built around footage shot during ten Sundays, from February 12 to December 30 of 2012, in the city of São Paulo, creating a reference for time and space that helps build a narrative marked by temporality. A film in which the main characters are the city of São Paulo and the work of Danish artist Olafur Eliasson. A new look on the city, its spaces, occupations and habitants.

Sunday is the new addition to the Videobrasil Coleção de Autores (VCA), a collection curated by Solange Farkas, founder and general curator of the Associação Cultural Videobrasil. The release marks the beginning of a new phase for VCA, a project that invited directors to make films with documentary characteristics on important contemporary artists. Born in Fortaleza, Ceará, Brazil, in 1966. He graduated in architecture and urbanism from the Brasilia University and has a master in theory and history of cinema from the New York University. In the 2000’s, he collaborated with the scripts of movies like Shredded April (2001), by Walter Salles, Cinema, Aspirins and Vultures (2005, 30th Mostra), by Marcelo Gomes, and Lower City (2005, 29th Mostra), by Sérgio Machado. Aïnouz made his debut in feature films direction in 2002 with Madame Satã, screened at the 26th Mostra. He also directed Suely in the Sky (2006, 30th Mostra), I Travel Because I Have To, I Come Back Because I Love You (2009), in partnership with Marcelo Gomes, The Silver Cliff (2011), Futuro Beach (2014), Central Airport: THF (2018, 42nd Mostra) and The Invisible Life (2019, 43rd Mostra), winner of Un Certain Regard section at Cannes Film Festival.