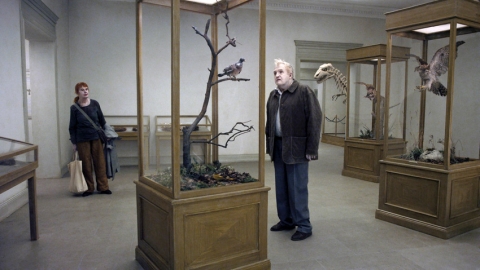 A PIGEON SAT ON A BRANCH REFLECTING ON EXISTENCE

A PIGEON SAT ON A BRANCH REFLECTING ON EXISTENCE

Two world-weary men on a sales trip selling joke items provide an insight into a chaotic world of the present, past and future; a world of dreams and fantasies. Diverse lives and circumstances are paraded before us, reminding us both of the grandeur of life and the vulnerability of man.


Born in Gothenburg, Sweden. He finished his film studies in 1969, the year he made his first film, A Swedish Love Story. He went on to make the short films Something Happened (1987) and World of Glory (1991), where he developed his style, characterized by the use of long takes. Mostra has screened his return to features Songs From the Second Floor (2000), winner of the Grand Jury Prize at Cannes; and You, the Living (2007).