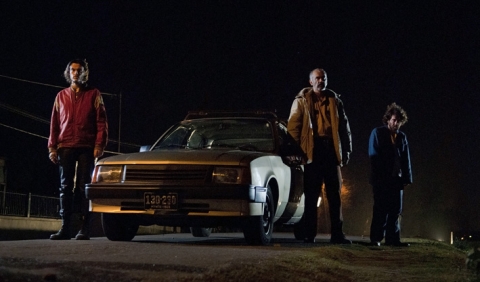 A German actor visits the city of Montevideo. He soon finds himself in trouble, lost in the city and faced with a gang of youths who try to rob him. Pedro, a former addict, intervenes, helps him escape and gives him a place to stay. Over the next few days, the foreigner tells several people his story of a lost love. This is how he meets Nelson, a quiet security man abandoned by his wife. Brought together by their suffering the three men go out in search of a wife for the German.


Born in Montevideo in 1974, he studied film in Uruguay, Mexico, Cuba and the United States. In 2002, he directed the short film Perro Perdido, co-directed by Daniel Hendler. As a cinematographer, he worked on Adrian Biniez’s Giant (2009), Federico Veiroj’s A Useful Life (2009) and Daniel Hendler’s Norberto’s Deadline (2009). The Enemies of Pain is his feature film directorial debut.