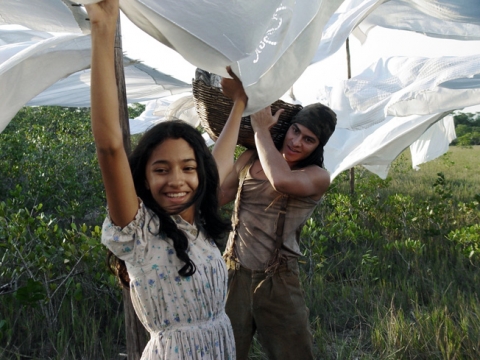 In Marajo Island, Zeneida was born predestined to become a shaman, something her father hides from her. As she faces the challenges of growing up as a woman, she has panic and anger attacks. Her father wants to put her in an asylum. However, when she meets her great love, Antônio, they flee into the forest and meet the mythical world of the Caruanas. Without any warning, Antônio and Zeneida find their ancestors, a lineage of shamans living in nature. Antônio and Zeneida are fighting to save their love, but are surprised by the news that Zeze, Zeneida’s mother, is dying. Only Zeneida, now a shaman, can save her. 
Born in 1949 in Porto Alegre, she studied film at the Universidade de Brasília, but concluded the course at Universidade Federal Fluminense. Since 1977, she has worked as a producer and director for film and television. Gaijin: Roads to Freedom (1980) won the Critic’s Prize at Cannes Film Festival. Since then, she directed TV series and several films, such as Aparecida – O Milagre (2010) and Amazônia Caruana (2010).