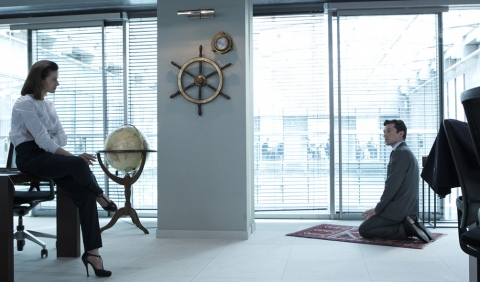 Angelo and Kasia met in Italy, in the Focolare Movement, a secular movement of Catholic inspiration. Their love and faith in God brought them together, but their relationship is broken by the girl’s return to Poland and her decision to enter the convent. Angelo arrives in Warsaw in order to persuade Kasia to change her mind and, while waiting for her decision, he takes up a job in an international corporation. The company is managed by ruthless and cynical Kris. In this corporate reality, Angelo, a believer, falls victim to the ridicule. Kris, using her power, plays with Angelo and wants to force him to break moral principles and yet at the same time she is fascinated by his faith. 
Born in Poland. A polyglot, he developed an international career as a film and theater director. Among other awards, he won the Jury Prize at the Cannes Film Festival by Constant Factor (1980) and the Golden Lion at the Venice Film Festival for The Year of Quiet Sun (1984). The Silence Touch (1993) was screened at the 18th Mostra. He has also directed And a Warm Heart (2008) and Revisited (2009).