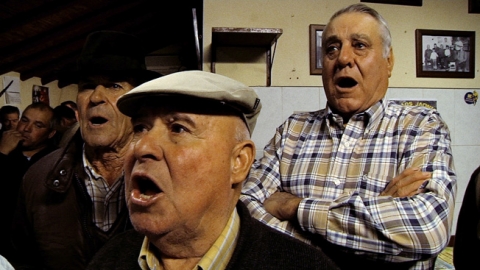 In Alentejo, dozens of amateur groups meet regularly to rehearse ancient polyphonic songs and to improvise typical music about this time. This is the "cante", born in taverns and in the countryside between peasants and miners, transmitted over several generations. In recent decades, new groups appeared on the outskirts of Lisbon and in several countries where the people from Alentejo emigrated. A musical journey to a unique mode of expression and passion of his interpreters.


Born in São Paulo in 1965, he studied philosophy at Pantheon-Sorbonne University, Paris I. He worked as an assistant director for several Portuguese filmmakers. His first work as a director was with the short movie Alcibiades (1991). He signed the direction of various documentaries, among them Fleurette (2002), Lisboners (2004), The City of the Dead (2009) and Alentejo, Alentejo (2014, 38th Mostra). In 2011, he released the fiction feature film Business Class.