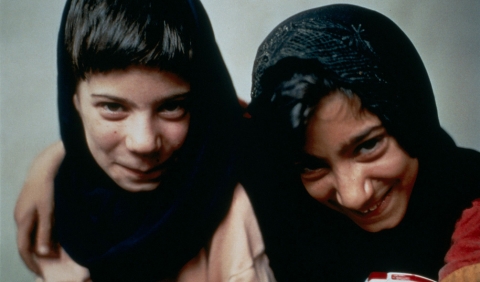 Two girls are locked up by their parents, an unemployed man and his blind wife, for eleven years. Their neighbors call social workers to investigate the situation and the girls must face the outside world for the first time. 
Born in Tehran, Iran, in 1980, she is the daughter of filmmaker Mohsen Makhmalbaf. Her first film, The Apple (1998), which she completed at the age of 17, won an Honorable Mention at the 22nd Mostra. She went to direct Blackboards (2000, 24th Mostra), winner of the Jury Prize at the Cannes Film Festival; a segment for the omnibus film 11`09"01 September 11 (2002, 26th Mostra); the features At Five in the Afternoon (2003), Jury Prize at Cannes, and Two-legged Horse (2008). The latter was screened during the 32nd Mostra, where she also served as a member of the International Jury.