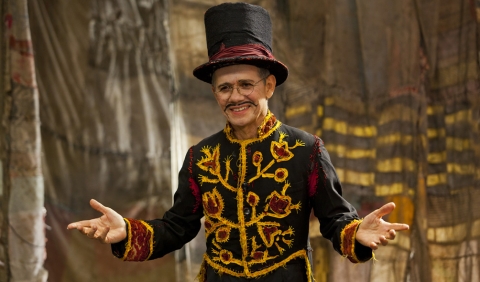 The film is a lyrical look at the universe of artist Antônio Nóbrega. It shows the work of a lifetime, characterized by a constant interpretation of popular culture, valuing the imaginary and symbolic universe and updating it within contemporary comprehension.


Born in João Pessoa, Brazil, in 1947, Walter Carvalho is an award-winning Brazilian cinematographer who has worked in more than 70 short and feature films, such as Leon Hirszman’s Que País é Esse? (1976), Walter Salles’ Central Station (1998) and Behind the Sun (2001); and Claudio Assis’ Mango Yellow (2002). Many of his features as a director of photography were screened at the Mostra, amongst them To the Left of the Father (2001), Madame Satã (2002), Fabricating Tom Zé (2006) and The Rat Herb (2008). As a director, made the feature documentaries Soul Window (2001, Jury Prize and Audience Award at 25th Mostra), co-directed by João Jardim; Moacir Raw Art (2005) and Raul – O Início, O Fim e o Meio (2011, Audience Award for Best Brazilian Documentary at the 35th Mostra).