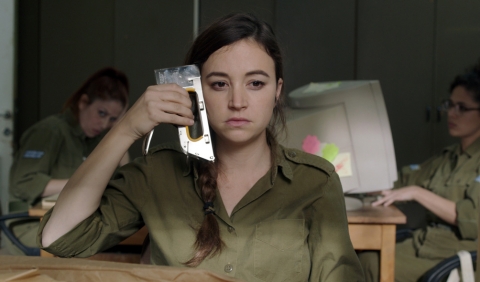 Zohar and Daffi are best friends; serving in an administration office at an artillery base in the south of Israel. They practically spend all their time together, sharing their secrets, their meals, and their passion for computer games. Daffi does all she can to be transferred away from the hated remote base, trying to obtain her dream of being relocated to Tel Aviv. Zohar, on the other hand, doesn`t seem to care so much about where she`s stationed. She is secretly in love with an officer but never dares walking up to him. Terrified by the possibility of being left alone in the desolated base without her best friend - Zohar will try to prevent Daffi from leaving.


Born in 1978 in Petah Tikva, Israel. She is a director, screenwriter, and comics artist. She studied animation at the Bezalel Art Academy and graduated from the Sam Spiegel Film School in Jerusalem. She authored screenplays for various television dramas. She directed short films such as The Waitress (2000). Zero Motivation is her first feature film.