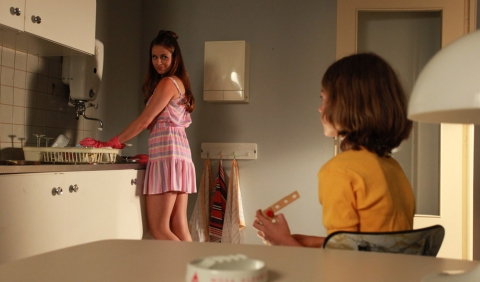 FAREWELL TO THE MOON

FAREWELL TO THE MOON

During the hot summer of 1972, twelve-year-old Duch, a boy living in an apartment block, has two obsessions: the latest NASA launch to the moon and spying on his next-door neighbor Mary, a beautiful model addicted to Valium. When Duch’s father meets a female artist who recently moved in two doors down, they begin an affair and he soon moves in with her. As Duch’s mother begins trying to turn her children against their father, the boy starts relying on Mary for company. 
Born in Hawaii in 1963, but raised in the Dutch town of Deventer, he attended the Rietveld Academy in Amsterdam. Working as a director and screenwriter since 1992, his first feature film was Winterland (2009). Farewell to the Moon is his second feature film.