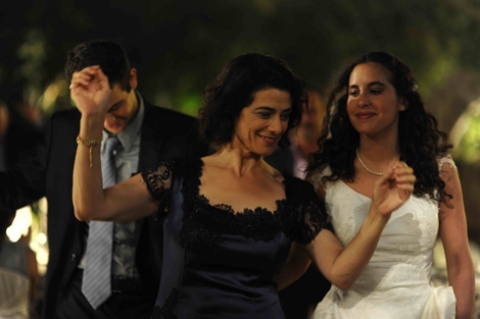 A Palestinian family living in the north of Galilee gathers to celebrate the wedding of one of their daughters. Internal conflicts explode between the different members of the family. The tension grows larger once their father falls into a coma and inches toward death. 
Born in Nazareth, Israel, and grew up in a Palestinian village north of Galilee. She started acting on stage at the age of 10, but decided to go to a photography school in Haifa. In 1987, she moved to London, and then settled in Paris where she started her career as an actress. Her feature films include Rashid Masharawi’s Haïfa (1996), Yousry Nasrallah’s The Gate of the Sun (2004), Eran Riklis’ The Syrian Bride (2004, 28th Mostra), Hany Abu-Assad’s Paradise Now (2005, 29th Mostra), Amos Gitai’s Free Zone (2005, 29th Mostra), and Steven Spielberg’s Munich (2005). She directed two short films, Le Pain (2001) and La Danse Eternelle (2004). Inheritance is her first feature film as a director.