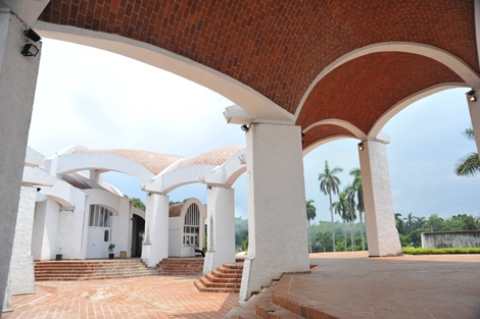 In 1961, Ricardo Porro, Vittorio Garatti, and Roberto Gottardi, three young and visionary architects, were commissioned by Fidel Castro and Che Guevara to create Cuba’s National Art Schools. Dancers, musicians, and artists from all over the country moved to Havana to study there, but as the dream of the Revolution quickly became a reality, construction was abruptly halted and the architects and their designs were deemed irrelevant in the prevailing political climate. More than forty years later the schools are still in use, but remain unfinished and decayed. Castro has invited the exiled architects back to finish their unrealized dream. 
She holds a masters degree in architecture from Princeton University. She is the founder and executive director of Ajna Films. Unfinished Spaces is her feature directing debut. 
Murray studied film and television production at the New York University’s Tisch School of the Arts. As a post producer and editor, his recent projects include No Direction Home (2005), directed by Martin Scorsese, and Capitalism: A Love Story (2009), directed by Michael Moore. Unfinished Spaces is his feature debut.