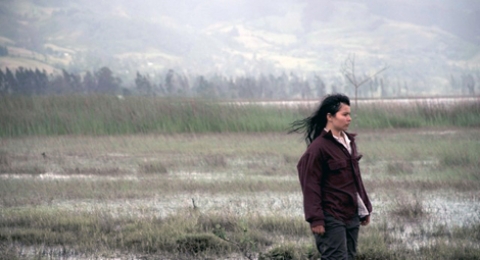 Alicia is helpless. Traumatizing war memories invade her mind like a ceaseless storm. Uprooted from her destroyed village by an armed conflict, Alicia tries to start a new life in La Sirga, a decadent hostel on the shores of a great lake in the highlands of the Andes. The house belongs to Oscar, her only family member who is still alive, an old solitary hermit. There, on a swampy and murky beach, she will try to settle down until her fears and the threat of war resurface again. 
Born in Cali, Colombia, in 1981. He studied social communications at the University of Valle and screenwriting at the College of Arts and Entertainment TAI Madrid. Vega has directed the short movies Amnesia (2001), Sunrise (2003), Tricolor Fútbol Club (2005) and Simiente (2011). La Sirga, his first feature film, was screened at the 36 th Mostra.