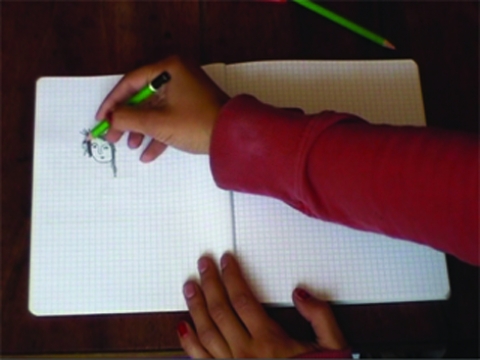 When Zoé Chantre was a child, she was found to have a giant S-shaped scoliosis of the spine and a large angioma of the left side of the brain. These conditions prevented her from carrying anything heavy and gave her ophthalmic migraines. Under pressure, she started to draw. Later, when she rediscovered these drawings, she decided to make a film all by herself, with no crew and as little gear as possible in order not to overburden her back: just one small camera with a built-in mike and a computer to edit on. She spent five years harvesting images, assembling, erasing, and ordering them to tell this tale of one little woman and soul mates: a tale that builds gradually over time and has become her way of dealing with the problem 
Born in 1981. She studied at the School of Applied Arts in Strasbourg, France. She developed several artistic video projects since then. Keep Me Upright is her debut film.