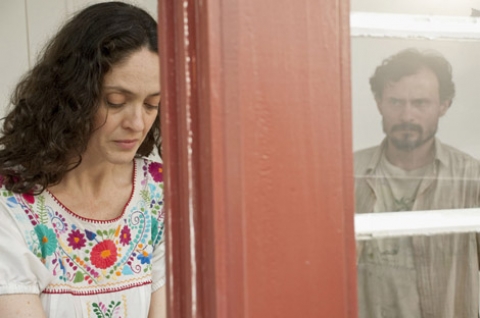 Years after a family tragedy, Dora and her daughter Julia restart their everyday lives. The Folia de Reis clowns and musicians dance across the streets of a little seaside town in Rio de Janeiro. The holiday season and the heat are ideal for swimming in the green waters of the region. For Dora, going to the beach means reuniting with her son Lucas, whose ashes rest on the sea. An unexpected arrival shakes up this routine. It’s Jorge, Dora’s husband, who left the day after the fire that killed Lucas and didn’t come back. His return brings back the pain of loss, yet opens up the possibility of overcoming it. 
Born in São Paulo, in 1970, he studied journalism at the PUC-RJ and was president of the Associação Brasileira de Documentaristas (Rio Sector) from 1993 to 1995. He directed short films Uma Rosa É Uma Rosa (1989) and Desperdício (1993) in addition to the documentaries, A Morta (1992), Gentileza (1994), and Testemunho: Nós do Morro (1995). Since 1996, he has coordinated the cinema nucleus for the group Nós do Morro, in Vidigal. The Old Soldier’s Ballad is his first feature.