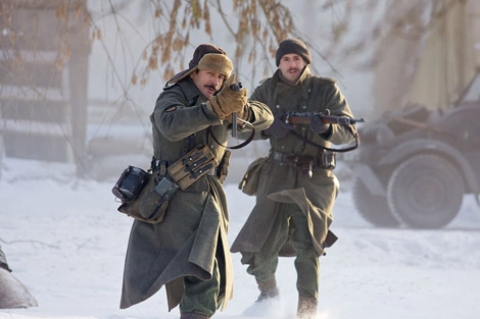 A battalion of the Spanish Blue Division runs into a desolated landscape: a cavalry squadron frozen to death in a lake, their bodies still riding their horses. One of the corpses lies on the ice with his throat slit. Engraved in blood on his shoulder is the warning: “Watch out, God is watching you”. Soldier Arturo Andrade, a former police inspector, is assigned to the case. He proceeds methodically with the investigation with the aid of Sergeant Estrada. The clues lead them to conclusions of a perverse vengeance. They are facing a serial killer who is a hunter in the snow. Everyone is under suspicion.


Born in Madrid, Spain, in 1953, Herrero is presently one of the most active producers in Spanish cinema, having produced films for Ken Loach, Juan Carlos Tabío, Arturo Ripstein, Adolfo Aristarain, Francisco José Lombardi, Juan José Campanella, among other filmmakers. As well as being a producer, Herrero also works as a director and made more than 10 films between short and feature films.