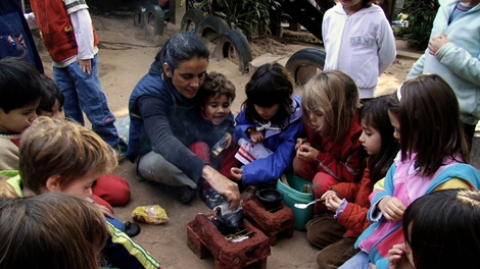 The film portrays the day-to-day life in an elementary school without precedents. The controversial and charismatic educator Therezita Pagani talks about the structural potential of a good education for a child. The documentary follows children of all ages experiencing their relationships and conflicts with the colleagues, nature, art, music and popular Brazilian culture. 
Born in São Paulo, Brazil, in 1973. She co-directed the medium-length documentary Ideias para o Futuro da Amazônia (2012). She also produced, directed and wrote a series of 13 shorts about the culture of school childhood for Programa Pelo Direito de Ser Criança, an initiative from Instituto Sidarta, sponsored by OMO. Seeds From Our Garden is her first feature film.