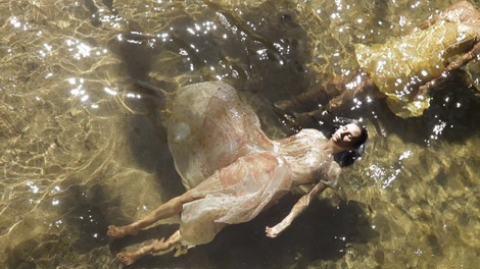 Elena travels to New York with the same dream that her mother used to have: to become a film actress. She leaves behind a childhood spent in the surreptitious years of military dictatorship, along with Petra, her seven-year-old sister. Two decades later, Petra also becomes an actress and travels to New York in search of Elena. She only has clues: home movies, newspaper clippings, a diary, letters. At any moment, Petra expects to find Elena walking through the streets, wearing a silk blouse. She rides the train Elena rode, reaches her friends, and follows her paths. She ends up finding Elena in an unexpected place. Little by little, the traces of each sister blend in, making it hard to distinguish one from another. The mother foresees. Petra deciphers. Now that she has finally found Elena, Petra must let her go. 
Born in 1983. Since the age of fifteen, she has worked professionally as an actress. She graduated in anthropology and theater at Barnard College, Columbia University. She got her master’s in communication and development at the London School of Economics. Her short film Undertow Eyes (2009) is a poetic portrait of love and aging, seen from the perspective of her grandparents. Elena is her first feature-length film.