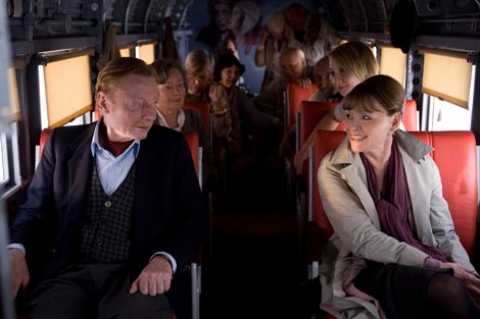 Extremely attractive Annegret Simon, newly arrived in the retirement home, catches the immediate interest of Herr Tiedgen. Like him, Annegret doesn`t like the change of wallpaper: movement therapy, choir singing, reading afternoons - life couldn`t be more boring. One day, when they are invited to take a round-trip in an aircraft, Tiedgen has an idea, one that will give them a new direction and will impress Annegret above all. No sooner than they have lifted off, Tiedgen slips into the cockpit - to emerge shortly afterwards as the new captain. 
Born in Dresden, Germany, in 1958. After high school, he worked as an assistant director for the German Television Broadcasting in Berlin. After finishing his studies in direction at the Film Academy Potsdam-Babelsberg, he started working as a screenwriter and director. He directed the short film Fronturlaub (1983) and the features Dubist Nicht Allein (2007) and Der Mond und Andere Liebhaber (2008). Fly Away is his third feature-length theatrical film.