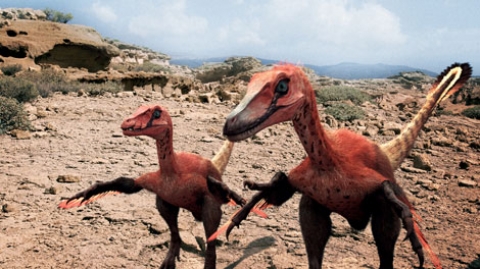 A cinematic journey that immerses the audience in the lost world of the Mesozoic through a series of animated short stories. With a scientifically accurate depiction of dinosaurs, the film intends to show their world through their eyes. Narrated by legendary filmmaker Werner Herzog. 
An artist specialized in dinosaurs, Krentz was the lead character designer for the film Dinosaur (2000), by Eric Leighton and Ralph Zondag, and has contributed to such movies as Treasure Planet (2000), by Ron Clements and John Musker, Sam Raimi’s Spiderman 2 (2004), Valiant (2005), by Gary Chapman and John Carter of Mars (2012), by Andrew Stanton, as well as many other live-action and animated films. 
A producer, screenplay writer and director, Nelson has produced Werner Herzog’s documentaries Grizzly Man (2005), Encounters at the End of the World (2007), Cave of Forgotten Dreams (2012, 35th Mostra) and Into the Abyss (2011). Amongst the projects that he has directed and produced are National Geographic Channel’s Dark Secrets Of The Lusitania, and The History Channel’s Engineering Evil.