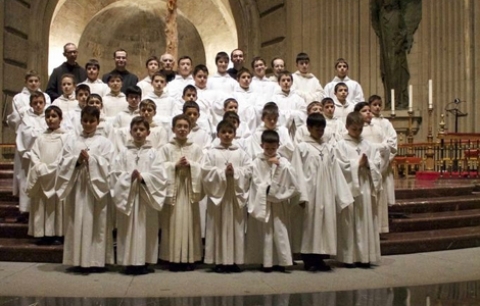 A couple brings their eight-year-old son to visit a Benedictine monastery. A monk shows them the common study room and the dormitory. The child seems to be attracted by the place and eager to start a new experience. He is attending the choir school along with nearly 50 other children. A car stops next to a big gate. Javier, an eighteen-year-old boy, stands there with his suitcase. A monk comes by the car to pick him up and they head to the monastery together, along the mountain hairpin bends. From the window, one can see a huge cross that overlooks the whole valley. Through the eyes of the chorus children and two young novices, we follow the everyday life of the monastery founded by Francisco Franco, whose remains are held in the Basilica, at the feet of the giant cross, only disturbed when the secular outside world tries to get in. 
Born in 1983 in Casale Monferrato, Italy. He studied philosophy at the University of Bologna. He started working as an editor in documentary productions in Madrid, Spain, and then went back to Italy, where he directed his first medium-length documentaries: La Culla Delle Aquile (2008) and Le Tre Distanze (2011). Under the Shadow of the Cross is his first feature.