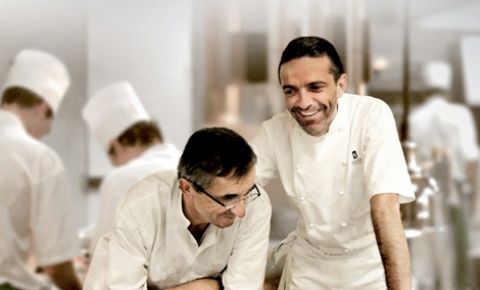 Step Up To The Plate

Step Up To The Plate

In 2009, French chef Michel Bras, winner of three Michelin stars, decided to hand his restaurant over to his son Sébastien, who has been working with him for fifteen years. A father and his son. Both at a crucial time in their careers. Is it possible to pass on one’s life’s work? Is it so easy for a son to make a name for himself? The story of a family over three generations, a reflection on passing down know-how and heritage, both professional and personal. 
He taught film directing for fifteen years at ESAV (École Supérieure d’Audiovisuel) in Toulouse. He directed a series of short and medium-length films, including L’Autre Rive (1995), L’île au Phare (2003), Je me suis Endormi (2004) and Reportage (2005). In 2010, he wrote and directed the play Les Eaux Fortes, which he adapted later to cinema as a medium-length feature. From 2001 to 2010, he directed the culinary documentary series Inventing Cuisine, which led to his feature debut Step up to the Plate.