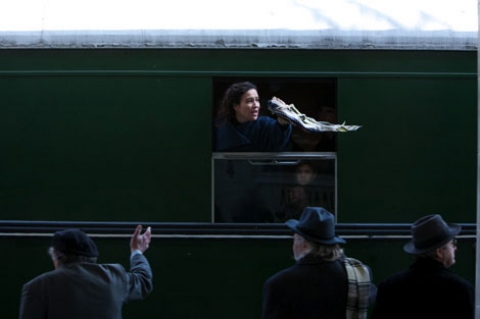 “The movie interweaves historical events and intimate memories. I examine the way that architecture represents changes in society and those that shape the architecture.

We follow the journey of Munio, my father, born in 1909 in Silesia, Poland, the son of a sharecropper of a Prussian junker. At 18, Munio leaves for Berlin and Dessau to study the Bauhaus of Walter Gropius, Kandinsky and Paul Klee. In 1933 the Bauhaus is closed and soon after the Nazis accuse Munio of betraying the German people. Munio is jailed, then deported to Basel. From there he leaves for Palestine. Once in Haifa, he starts his career as an architect, adapting the European modernist principles for the Middle East.

The movie is a voyage searching for the relationships between a father and his son, architecture and movies, the history of a journey and intimate memories. Like in my movie Carmel, based on my mother Efratia`s letters, there is no chronological sequence of events. It is not a reconstituted biography, but a mosaic. The story comes together piece by piece, as a poetical association of pictures, faces, voyages, real architecture and snippets of fiction.”