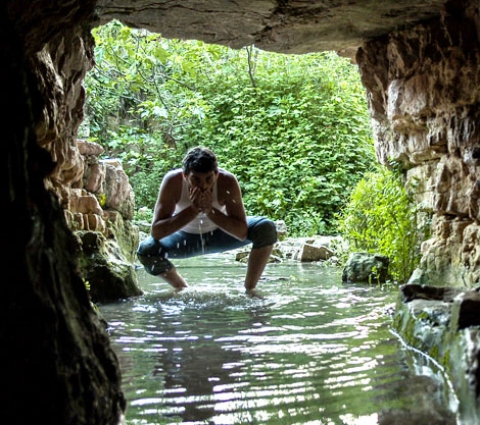 “Water” is a project consisting of seven shorts made by eight directors, all revolving around the need for water, originated by filmmaker Yael Perlov.
In the countryside, a young couple from Tel Aviv has to share a fountain with a group of Palestinian workers, between ancestral fears and hints of solidarity (Still Waters). During the summer, a Palestinian water seller supplies tanks and wells in the Bethlehem area, as it is left dry by the settlers (The Water Seller). An Israeli soldier on the verge of a nervous breakdown and a Palestinian peasant who violates curfew to water his watermelons try to tame a donkey (Raz and Raja). A famous actor and his two sons have a particular relationship, based on misunderstandings and eyedrops, with their neighbor, an old woman who survived the concentration camps (Eye Drops). An old Arab man, who lived in the US for years, manages a swimming pool. Palestinian families who have never seen the sea attend until Israeli settlers come to invade this space (Kareem’s Pool). An Israeli soldier, during a break from his drills, remembers an episode from his childhood: his mother was washing his hair in the bathtub, while his father was urging him on to hurry up (Drops). A young and shy orthodox Jew is waiting for her parents to take her to a Shidduch, a meeting to arrange a marriage. In the meantime, she has a bizarre conversation with an Arab plumber through a closed door (Now and Forever).


Co-director of the segment Still Waters. Born in Giv’atayim, currently living in Tel Aviv. He studied at the film and television department of Tel Aviv University. 
Co-director of the segment Still Waters. Born in Natanya, currently living in Tel Aviv. She studied at the Nissan Nativ Acting Studio in Tel Aviv.


Director of the segment Eye Drops. Born in the region of Galilee in 1953. He studied theater and Arab literature at Tel Aviv University. He has been working as an actor and a director in theater and cinema. He acted in the Academy Award-nominated film Beyond the Walls (1985) and directed the medium-length films Jenin, Jenin (2003), Min Yum Mahrucht (2005), and Zahara (2009).


Director of the segment The Water Seller. Lives in Bethlehem. He studied film at the Dar al-Kalima Art College in Bethlehem. 
Director of the segment Drops. Born in Jerusalem to Russian immigrants and raised in Haifa. He studied at the film and television department of Tel Aviv University and the Nissan Nativ Acting Studio in Tel Aviv. 
Director of the segment Now and Forever. Born in Ramat Hasharon and currently living in Tel Aviv. He studied at the film and television department of Tel Aviv University. 
Director of the segment Raz and Radja. Born in Kibbutz Yehiam. He was raised in Paris and currently lives in Tel Aviv. He studied at the film and television department of Tel Aviv University.