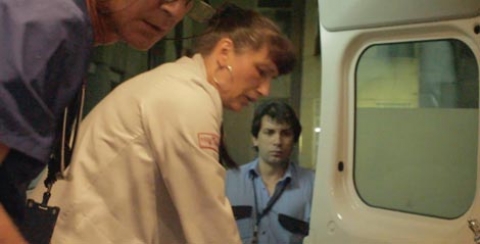 In a city where thirteen ambulances struggle to serve two million people, Krassi, Mila, and Plamen are our unlikely heroes: chain-smoking, filled with humor and relentlessly saving lives against all odds. Yet, the strain of a broken system is taking its toll. How long can they keep on fixing society’s injured until they lose their empathy? 
Born in Sofia, Bulgaria, in 1981. He initially pursued a career as a violinist. In 2008, he graduated from the National Film and Television School in England. He directed the short film Goleshovo (2008) and the documentary feature Sofia’s Last Ambulance (2012). Three Quarters is his second feature film.