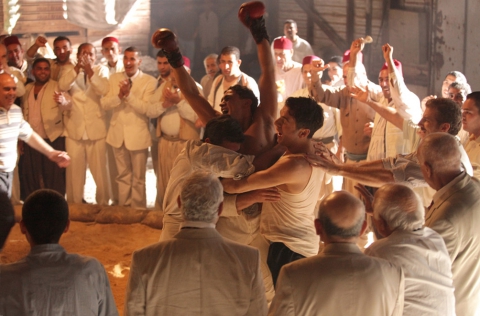 "Tunisian Jewish boxer Victor Perez begins training at the age of 14, along with his older brother Benjamin ""Kid"" Perez. He rises to fame thanks to the help and guidance of Leon Bellier, a prominent boxing manager responsible for taking the siblings to Paris. In France, he has a relationship with French-Italian actress Mireille Balin and wins the International Boxing Union’s crown, becoming the youngest world champion in boxing history. But in the German-occupied French capital, Perez is arrested in 1943 and taken to Auschwitz, where he is reunited with his brother Benjamin and is forced to participate in boxing matches for the amusement of the Nazis. Based on the true story of the man who is said to have fought 140 matches in 15 months, winning 139 of them."


A French scriptwriter, producer, director and writer, he was born in Oran, Algeria and grew up in Paris. He is responsible for producing the film Games of Love and Chance (2004), by Abdellatif Kéchiche, 3 petites filles (2004), by Jean Loup Hubert, and Félix Olivier’s Jihad (2006). Victor Young Perez is his directorial feature debut.