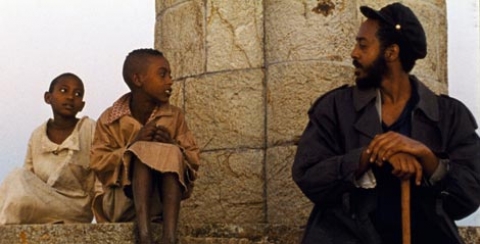 Set in Ethiopia and Germany, Teza chronicles the return of the African intellectual Anberber to his country of birth during the repressive Marxist regime of Haile Mariam Mengistu and the recognition of his own displacement and powerlessness at the dissolution of his people’s humanity and social values. After Anberber spends several years in Germany studying medicine, he returns to Ethiopia only to find the country of his youth replaced by turmoil. His dream of using his craft to improve the health of Ethiopians is squashed by a military junta that uses scientists for their own political ends. Seeking the comfort of his countryside home, Anberber finds no shelter from violence. The solace that the memories of his youth provide is quickly replaced by the competing forces of the military and rebelling factions. Anberber must determine if he can bear the strain or piece together a life from the fragments that lay around him. 
He was born in Ethiopia in 1946 and studied at the Goodman School of Drama in Chicago and at the University of Southern California in Los Angeles (UCLA). Since 1975, he is an Honorary Professor of film making at the Howard University in Washington, DC. He finished his first film Hour Glassand Child of Resistance in 1972. In 1976 he made Bush Mama. The same year marked the release of Harvest: 3000 Years, which won the Silver Leopard at the Locarno Film Festival. In 1978 he finished his first documentary Wilmington. He also made After Winter: Sterling Brown (1985), Sankofa (1993), Imperfect Journey (1994) and Adwa - An African Victory (1999). Teza won the Best Screenplay and Special Jury prize at 2008 Venice Festival.