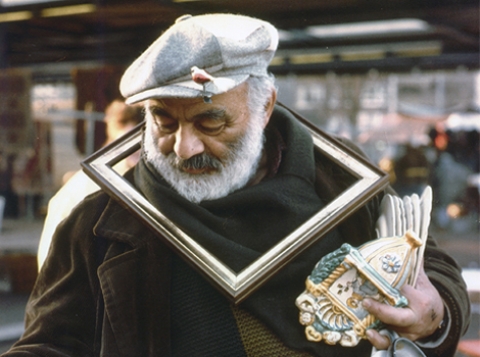 With his death in July 1990, Sergei Paradjanov left an unfinished but essential work for Soviet and Russian history. His work reflects the ethnic wealth of the Caucasian people. This film was shot at his strange residence; on the set of his last film, Ashik Kerib (1988); in Erevan`s Paradjanov museum; in Paris and Tbilisi. 
He was born in Lespignan, south of France, and studied film and philosophy. As a director and journalist, he contributed with the daily “Liberation” and the magazine “Cahiers du Cinema”. As a filmmaker and producer, he has been directing documentaries since 1976. Amongst them, Serguei Paradjanov, Un Portrait (1988, 12th Mostra), Sartre and de Beauvoir Tribulations to Caucasus (2003), Arthur Rimbaud, Cyprus Poste Restante (2006) and Pere Castor’s Works (2007). He has written the book Sergueï Paradjanov, published by Cahiers du Cinéma.