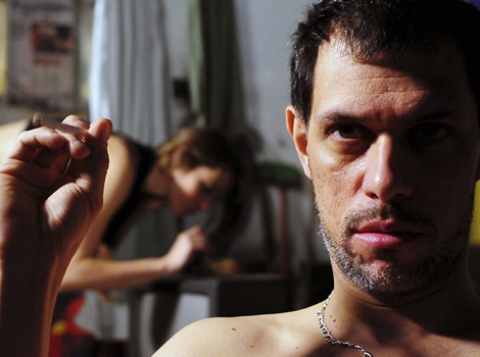 In the mythical neighborhood of Reus, in Montevideo, the power struggle between the Tano family and the Jewish merchants is about to burst. A death and the arrival of a new drug break through the old codes of the neighborhood make things start to get out of control. The end of an era is near. 
Was born in Montevideo, Uruguay, in 1972. Lived in Rio de Janeiro for three years, where he took part on the actors workshop directed by Fátima Toledo. Has also studied performing arts in Montevideo. He has been working in theatre productions since 1997. Has starred in the Uruguayan TV series Adicciones (2011). Reus is his directorial feature debut. 
Was born in Buenos Aires in 1974, where his parents were exiled during the military dictatorship. Has lived in Ecuador and returned to Uruguay in 1985. Studied cinema at the ORT University, in Uruguay, where he met Pablo Fernandez. Has directed and wrote the script of the short films Tres Tatuajes (2002), Caja de Cambios (2003) and Mil Millones de Soles (2004), having also worked as editor on Gabriela Guillermo’s feature documentary Envejecer Viviendo: Rivera (2008). Reus is his directorial feature debut.


Was born in Sweden in 1974, where his parents were exiled during the period of the military dictatorship. Producer and director, he studied at the university ORT in Uruguay, where he met Alejandro Pi, with who he co-directed his thesis short film Mil Millones de Soles (2004). Has graduated in 2004 and since then has directed several documentaries and advertising films. Reus is his directorial feature debut.