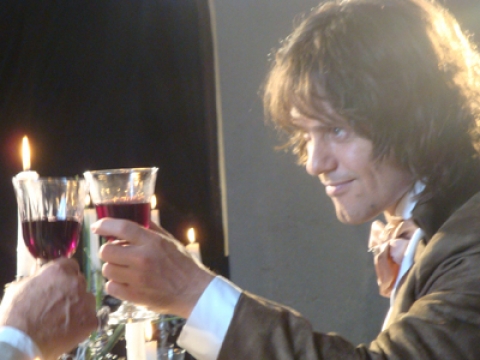 The Last Novel of Balzac

The Last Novel of Balzac

In 1965, Waldo Vieira, a psychic medium that worked with Chico Xavier, writes the novel Cristo Espera por Ti (Christ waits for you), supposedly dictated by the spirit of French writer Honoré de Balzac (1799-1850). Many years later, the book is found by the psychologist Osmar Ramos Filho, who dedicates years of research on it. From the research, Osmar creates an original interpretation of The Magic Skin (La Peau de Chagrin). Along with Osmar’ statement, the film dramatizes The Magic Skin in the form of a silent movie. It’ the portrait of a modern Faust, the artist confronted to suicide when he believes the achievement of a work of art leads him to death. Art kills the artist, a subject dear to Balzac.


Was born in Poções, Bahia, in 1938. Studied at Universidade Federal da Bahia and at the Cuban Institute of Arts and Movies Industry (ICAIC). After his first feature film, Viramundo (1964/65), he planned an audiovisual encyclopedia of the Brazilian northeastern wilderness for the Brazilian Studies Institutes at USP, which highlights Viva Cariri! (1969). He directed the documentary Iaô (1976, 2nd Mostra) and Coronel Delmiro Gouveia (1977). He produced the TV series A Linguagem do Cinema (2000-2003) and wrote the book Glauber Rocha e o Cinema Latino-Americano (1994). He also directed the feature Tudo Isto me Parece um Sonho (2008). The Last Novel of Balzac won the Special Jury Prize at Gramado Film Festival (Brazil).