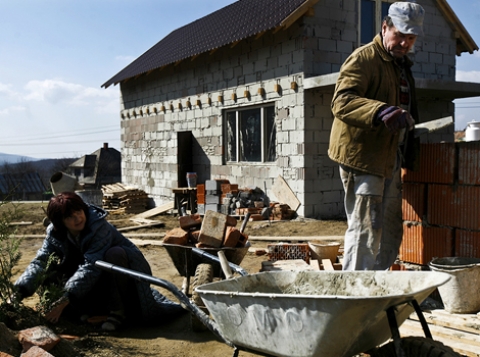 The story of an imperfect man’s dream of a perfect family. Imrich builds a house for each of his daughters in his own backyard. When his older daughter Jana became pregnant at the tender age of 18, Imrich threw her out, stopped building her house and focused all his energy on building a second house for the younger Eva. What was once a small girl’s innocent drawing of a dream has now become a nightmare for the teenage Eva. She is forced to work on the construction of her “gift”. But Eva dreams of the world beyond the walls built by her father. 
Was born in Slovakia in 1977. She graduated in screenwriting in Bratislava and worked as a script editor and copywriter in Slovak television. She directed the documentary short films Miss Mária (2000) and Paľko (2003) and wrote and directed the television feature film Silence (2005). The House is her first feature film.