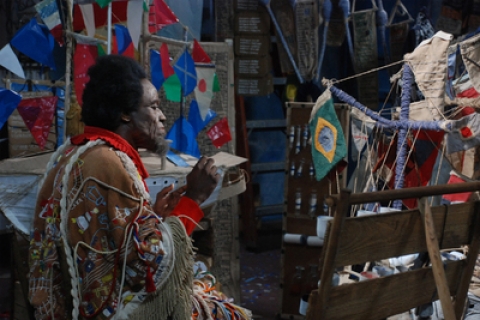 Lord of the Labyrinth

Lord of the Labyrinth

In a warm and humid night of 1968, Arthur Bispo do Rosário walks through the streets of Rio de Janeiro guided by an imaginary army of angels announcing that he is the “Chosen One”, sent by God to “judge the living and the dead”. His personality and his work are revealed through the main moments of his life: the adaptation at the mental hospital where he spent 50 years of his life, the stages of self-isolation and confinement, the birth of his craftwork and the late recognition of his art.


He majored in philosophy by the Federal University of Rio de Janeiro. He worked as Assistant to the Director in publicity films and features. He was co-scriptwriter for O Silêncio da Chuva, a project by Murilo Salles and was part of the team for Chatô – O Rei do Brasil. The documentary The Line – Lucio Costa and the Modern Utopia, his first feature as director, won the Special Prize of the Jury at the Gramado Festival.