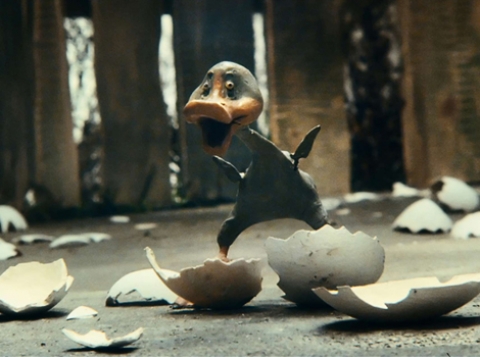 An adaptation from the Andersen tale played out in musical comedy mode with excerpts from Tchaikovsky’s The Swan Lake. In a farmyard, roosters, hens, ducks and geese live and lay eggs together. One fine day, a rooster discovers a giant egg behind the farmyard kingdom fence, and discreetly slips it into the clutch laid by his partner. Very soon, a cygnet emerges, but as he in no way resembles any of them he is immediately stigmatized by the whole farmyard, enduring humiliations and suspicion on the part of his feathered companions. In the future, however, he becomes a magnificent white swan. 
Born in 1941 in the USSR. In 1975, he started to work in animation as a director at Soyuzmultfilm Studios, where he signed fifteen films. Won the Short Film Palme d’Or of the Cannes film festival for Vykrustasy (The Coiling Prankster, 1988). He uses a variety of techniques and materials in his animations such as matches in Conflict (1983), ropes in Marriage (1987) or origami in Adagio (2000). In 1991, Bardine and his team started their own studio, Stayer.