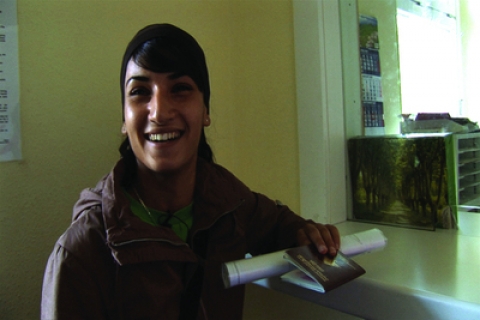 The Lebanese siblings Hassan, Lial and Maradona are successful dancers and musicians living in Berlin’s notorious district Neukölln. But the three have a problem: their family is in danger of being deported out of Germany. They plan to use their artistic talents to earn enough money and secure the family’s future. But the pressure has its toll on the siblings. Between Lial and Hassan a rivalry arises about who of the two is the family’s bread-earner. In the meantime, Maradona is getting himself into trouble and gets kicked out of school. A little hope arises when Maradona surprisingly is accepted in a TV casting show. Should he win the 100,000 euro cash prize, it could be him who will secure the family’s future in Germany


Was Born in Basileia, Switzerland, in 1975. Studied Cinema in Rome and directed the short films Waking Up the Nation (2006) and Orange Farm Water Crisis (2004), in co-direction with Christina Hotz. Neukoelln Unlimited (2010) is his feature film debut as a director.


Was Born in Germany, in 1970, where he studied Documentary Filmmaking. He has worked as a freelance cinematographer for various broadcasters and production companies. He directed the theatrical documentaries Richter: Lebenslânglich (2006) and Landliebe (2003). Neukoelln Unlimited (2010) is his feature film debut as a director.