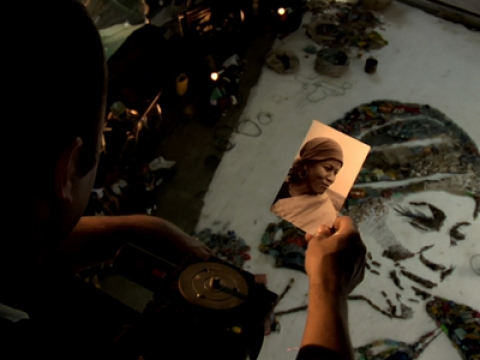 The trajectory of the rubbish from the biggest landfill deposit in Latin America, located on the outskirts of Duque de Caxias, Rio de Janeiro, until it is transformed by the hands of artist Vik Muniz. Sold at prestigious international auction houses, the works often return to Rio to be part of the art collection of the city’ high society.


Was born and grew up in London. Studied Literature in Oxford and moved to New York to study Cinema. She worked on children programs for TV and directed short films, music videos and the documentaries Devil’s Playground (2002) and Blindsight (2006).


Worked as an editor in films such as O Quatrilho (1995), by Fábio Barreto, Tieta (1996), by Cacá Diegues, and Janela da Alma (2001, 25th Mostra), by João Jardim and Walter Carvalho. Directed the short film With the Whole Ocean to Swim (1997) before her feature debut with Wasteland.