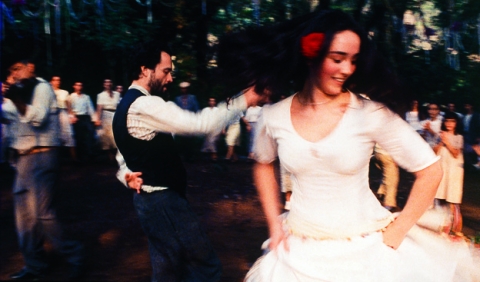 TO THE LEFT OF THE FATHER

TO THE LEFT OF THE FATHER

In provincial São Paulo in the forties, Pedro is detailed off by his mother to bring André, his younger brother, back home. The boy, however, still has painful memories that are very much alive, concerning the reasons that made him leave home: an extremely repressive father; a mother of such tenderness, she is suffocating; Pedro’ envy owing to the special attention he receives from his father. These, however, are not the only motives that have led André to draw away from his family. The relationship between he and his sister, Ana, was not limited to the usual feelings of affection common between brother and sister. Based on the book by the same name by Raduan Nassar, To the Left of the Father is a kind of visit to the parable of the prodigal son. This time, however, the return of the beloved will bring deep and unexpected changes to the family routine. Subjects such as love, incest, prostitution, homosexuality, and family relationships are brought on screen as from the story of a family of Lebanese immigrants in up-country Brazil. 
Born in Rio de Janeiro, in 1960. A film maker and television director with a background in languages and architecture, Luiz Fernando Carvalho made his first film, The Waiting, in 1986. This short film was awarded the prize for best film at the San Sebastián Film Festival (Spain) and for best film, best photography, and best actress at the Gramado Festival. He then built up a solid career on television that included directing the novellas Renascer (1992) and O Rei do Gado (1996), Meu Pedacinho de Chão (2013) and Velho Chico (2016) and the miniseries The Maias (2001), Today Is Maria`s Day (2003), and A Pedra do Reino (2007). He also directed the feature film To The Left of the Father (2001) which won the Best Brazilian Feature Film – Audience Prize at the 25th Mostra.