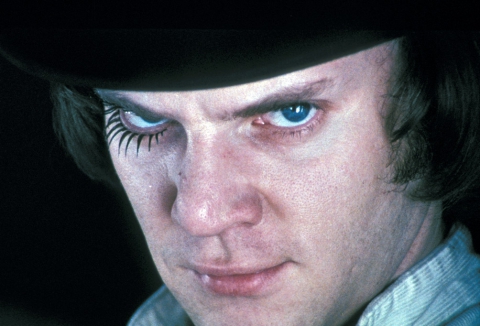 "Alex is the leader of the “droogs”, a group of young British delinquents whose ultraviolent acts are triggered by the drug laced milk served at Korova’s Milk Bar. Fond of sex, stealing and Beethoven, Alex is arrested after being betrayed by his own gang. During his time in prison, he’s submitted to an experimental psychiatric treatment, promising to turn a violent impulse into repulse. But when radical issues are fought with radicalism, things sometimes don’t go as planned. Based on the novel by Anthony Burgess.

The story expressed perfectly Kubrick’s wary attitude towards the way modern society was developing. His ability to turn violence of any kind into a grotesque ballet was first seen in Dr. Strangelove and will feature later again in The Shining (1980) and in the first part of Full Metal Jacket (1987).
"