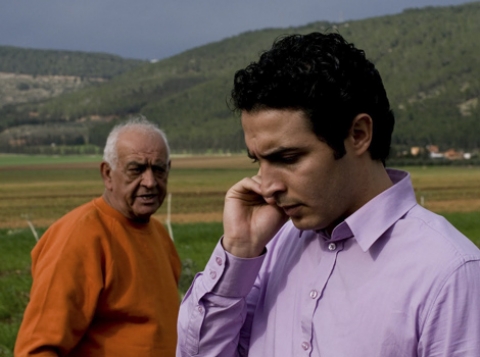 Man Without A Cell Phone

Man Without A Cell Phone

Twenty-something Palestinian-Israeli slacker Jawdat just wants to have fun with his friends, talk on his cell phone and find love. Instead, he navigates unconvincing dates with Muslim, Christian and even Jewish girls, and wrestles with the Hebrew college entrance exam. Meanwhile, his curmudgeonly olive-farming father, Salem, is determined to drag Jawdat and his whole community into a fight against a nearby Israeli cell phone tower that he fears is poisoning the villagers with radiation. But Salem’s efforts to remove the tower disrupt Jawdat’s precious cell phone reception,

preventing any further communication with his potential girlfriends. 
Was born in 1975 and raised in Iksal, a Palestinian village near the city of Nazareth, Israel. He graduated in Film Studies and English Literature from Tel Aviv University. Later, he graduated in Film Direction at Columbia’s School of the Arts. His short film Be Quiet (2005) won the Third Prize at the Cinéfondation Selection at the Cannes Film Festival. Man without a Cell Phone is his first feature film.