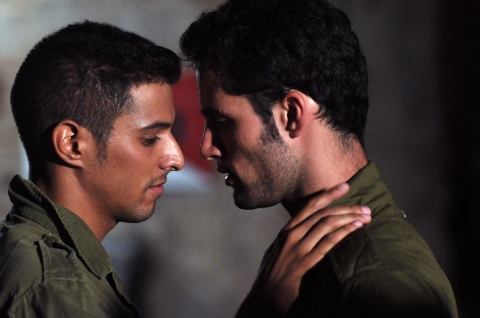 Snails In The Rain

Snails In The Rain

The year is 1989, back when people still waited by their mailboxes. Boaz is an attractive 25-year-old linguistics student who lives in Tel Aviv with his girlfriend Noa. One day, he begins to receive anonymous, obsessive love letters by a closeted male admirer. Though he laughs them off at first, he soon notices that the author appears to be someone who knows a lot about his personal life. Every man who crosses his path on a daily basis becomes a potential suspect and soon Boaz begins to question his own heterosexuality as well.


He graduated from Tel Aviv University. He directed the short films Passiflora Waltz (2003) and Bedtime Stories (2010), among others. He also directed the documentary films My First War (2008), There Must Be another Way (2009) and The Invisible Men (2012). He was head of the production department at Jerusalem’s Sam Spiegel Film School. Snails in the Rain is his fiction feature debut.