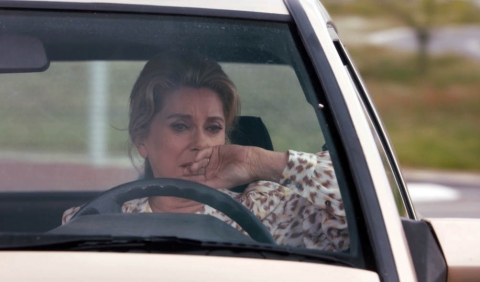 Cathy, a beautiful 60-year-old widow, runs a restaurant at a small town. She’s been having a passionate affair with a local industrialist, who regularly promises to leave his wife for her. When he finally decides to take the plunge, it’s not for Cathy, but for a younger woman who’s expecting his baby. The next day, she abruptly leaves the restaurant and decides to take a drive in order to calm down, a drive that ends up lasting a week. Along the way, she picks up her 10-year-old grandson, who she barely knows.


Born in Paris in 1967. She is an actress, director and screenwriter who graduated from La Fémis. Her directorial debut was Clément (2001), which she also starred in, won the Youth Award at Cannes. Her next directing jobs were Backstage (2005) and a segment of the omnibus film The Players (2012). As a screenwriter, she co-wrote Maïwenn’s Polisse (2012). On My Way is her third feature film.