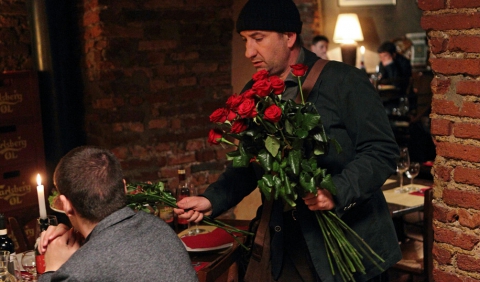 Let’s imagine there’s a new occupation and it’s called “replacement.” Let’s imagine that an unemployed man practices this occupation it every day. He does nothing but take the place, sometimes just for a few hours, of someone who has absented himself from his official job. He is content with little, but money isn’t everything in life: there’s the need to stay in shape and not to let yourself go in a moment of deep crisis. Let’s imagine then that there’s a young man of twenty, his son, who plays the sax divinely and so is lucky because he’s an artist. And let’s imagine Lucia, who is hiding a secret behind her desire to get on in life. Will they manage to reach the next episode safe and sound?


Born in Italy in 1945. Film critic and documentary filmmaker, he directed the feature films Colpire al cuore (1983) and Open Doors (1990). In 1992, he was awarded with the Jury Prize in Cannes with The Stolen Children (1992). He has also directed L’america (1994), presented at the 19th Mostra, year in which he was part of the International Jury and was awarded with the Critics Prize, and Così Ridevano (1998), exhibited at the 23rd Mostra and Golden Lion at the Venice Film Festival. L’Intrepide is his latest feature film.