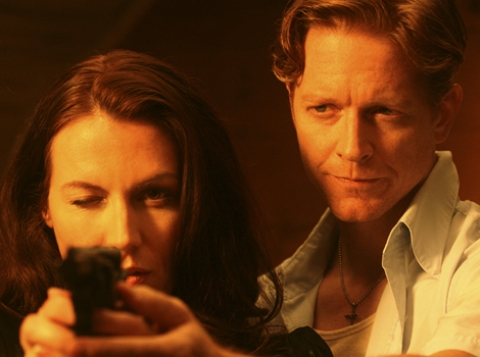 The movie tells about a barber working for the American Army at the German Prisoner of War camp at Fort McCoy, Wisconsin during World War II. Embittered that he cannot fight, Frank must take a stand when a Nazi SS officer threatens his wife. Her catholic sister falls for a Jewish soldier haunted by the Battle of Monte Cassino and the death of his best friend. 
As an actress, she has starred in TV series like Mad Men, Criminal Minds, Brothers & Sisters, Lost and Heroes. Fort McCoy is based on her grandparents` true story when they lived next to a German prisoner’s camp in Wisconsin during World War II. 
Born in Philadelphia in 1965. His first lead came with the film Final Impact (1992). He wrote and acted in the psychological thriller Dual (2008) and wrote and directed the independent film God`s Ears.