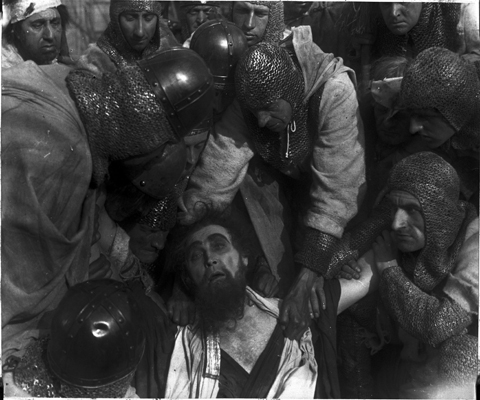 Questioning war and religious intolerance, Manfred Noa’s Nathan, the Wise, a classic from the silent cinema era, brought along an allusive tagline – “humanity’s film” – when it was first released in Berlin on December of 1922. Yet its box office success had little impact on the film’s destiny during the following years: it was censored in Munich, where the National Socialist German Workers` Party headquarters were located. The film was accused of presenting “Jewish propaganda” and was never again screened in Germany after Hitler’s rise to power.
For nearly seventy years, Nathan, the Wise was considered lost, until a copy was found in Moscow in 1996. The 37th São Paulo International Film Festival will be screening a restored version of this relic in an outdoor event at Ibirapuera Park, following the previous historic screenings of the classic Metropolis in 2010 for the 34th Mostra and Nosferatu in 2012 during the 36th Mostra, both in the same park. The screening will be accompanied by an original soundtrack specifically composed for the film by Lebanese composer Rabih Abou-Khalil.
The film is an adaptation of the play of the same name by German playwright and poet Gotthold Ephraim Lessing, written in the 18th century in reaction to the censorship he underwent after publishing an essay by philosopher Samuel Reimarus that criticised Christian religions. It is set during the 12th century Crusades in Jerusalem, with the wars between the Christians, the Jews and the Muslims as a backdrop; the struggle in this case is represented by Nathan, the wise Jew (Werner Krauss, from The Cabinet of Dr. Caligari); a templar knight and Saladin the Sultan, the Muslim core of the conflict, at times portrayed as the exotic element.
Much like in the original story, the film ends with a timeless appeal for respect amongst different faiths, a message that wasn’t well received in post-World War I Germany and which doomed it to fade away into oblivion.

The Restoration
Eight decades after the release, the Film Museum München rediscovered the only existing copy of Nathan, the Wise among the Gosfilmfond collection (a Russian archive institution) in Moscow, under the title “The Storm of Jerusalem”. The institution had made a black and white copy – one that had become deteriorated, without the original title, and with chapters that had been randomly inserted – of the original nitrate negative, which no longer exists. In 1997, the Film Museum München acquired a copy of the film, which was consequently re-subtitled and corrected according to German censorship archives, and coloured following the conventions of the 1920s.


This prolific German director studied painting and worked as a theatre scene decorator before starting to work with film. He made around 40 films between 1917 and 1930, the year of his death, at the age of 37. He is known for his epic productions such as Nathan, the Wise and Helena (1924), an ambitious German adaptation of Homer’s The Iliad. The director’s political views came into irreconcilable conflict with the Nazis coming to power, and part of his work was considered lost until the 1990s.