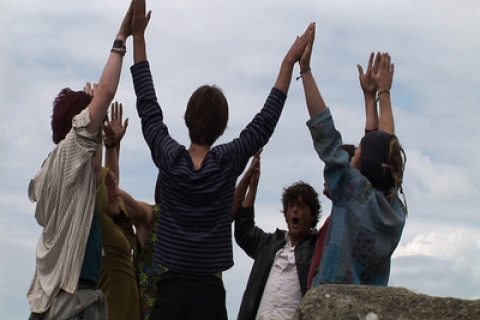 I Am Jesus
Italy

The everyday life of three communities that have formed around different characters claiming to be the Second Coming of Christ. An organic farming community in Siberia has evolved around a charismatic, but introvert man called Vissarion. His teachings focus on developing a society prepared to survive in a scarce future. In Brazil INRI Cristo has become a media phenomenon. While appearing in almost every TV show of the country he has built a safe haven for his mainly female followers. David Shayler is a former secret service agent in the UK who has become spiritual after going to prison. He is part of a young squatting community fighting capitalism.


Was Born in Vienna, Austria, in 1984. Studied graphic design and advertising in Vienna. She graduated in 2008 and was awarded a scholarship at Fabrica, Benetton’s Research Centre on Communication, focusing her work on film and video. I am Jesus is her first feature film.


Was born in São Paulo in 1984, where she studied Communication Sciences. Worked as production assistant and as director assistant at the film production company Cinemacentro Filmes. In 2006 she worked as DOP assistant for the Brazilian TV Rede Record. In 2008 Heloisa was awarded a scholarship at Fabrica, Benetton’s Research Centre on Communication. I am Jesus is her feature film debut.