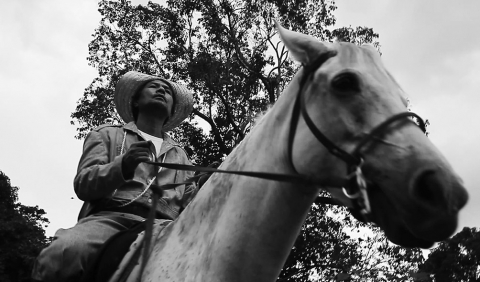 Prologue To The Great Desaparecido

Prologue To The Great Desaparecido

"The first “disappeared” person in the history of the Philippines was Andrés Bonifacio, father of the Philippine Revolution against colonial Spain, who was betrayed and murdered by Philippine President Emilio Aguinaldo in 1897. Bonifacio’s wife, Gregoria de Jesús, then spent 30 days searching for his missing body. This short film follows Gregoria during her search. A few brief images of Bonifacio alive appear during the film as he urges her not to lose hope.

As the film’s title suggests, Diaz intends to make a much longer film based on this story—in fact, he first wrote the script in 1999. Though Diaz filmed the short as a way of raising funds and awareness for the eventual feature, Prologue functions as a beautiful stand-alone work. It suggests that even in what seem to be the worst and most deceptive of times, the truth exists to help guide us forward."

More information about the project can be read at lavdiaz.com